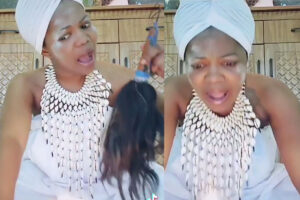 Controversial Ghanaian businesswoman and music executive, Mzbel has hinted that she is presently going through financial crisis and need urgent intervention or remedy. In a hilarious video she posted on her Instagram page originally made on TikTok, Mzbel was seen wearing a white dress with powder all over face seated around a burning candle.

Definitely the mother of one was only trying to entertain herself and her followers on Instagram as in the video she was chanting some unknown words in the form of a song and she revealed in the caption that the system is not working but she needs to pay her bills. Her actions in the video raised questions if she was summoning spirits to get sugar daddies who will sponsor her to pay her bills.

When the system is not working 😂 don’t vex me wai, I need to pay my bills 😂

Watch the video below;

In other news, popular Nigerian relationship coach and se.x therapist, Blessing Okoro has expressed her displeasure over the attitude of Big Brother Naija Season 6 housemate, Maria. Blessing Okoro asserted on her Instagram page that Maria cannot communicate properly with other housemates in the house and bemoaned how she puts up a fight at the slightest chance. The controversial socialite stated that she is not a fan of Maria and wants her out of the competition as she compared her to Pere who never raises his voice whilst communicating.